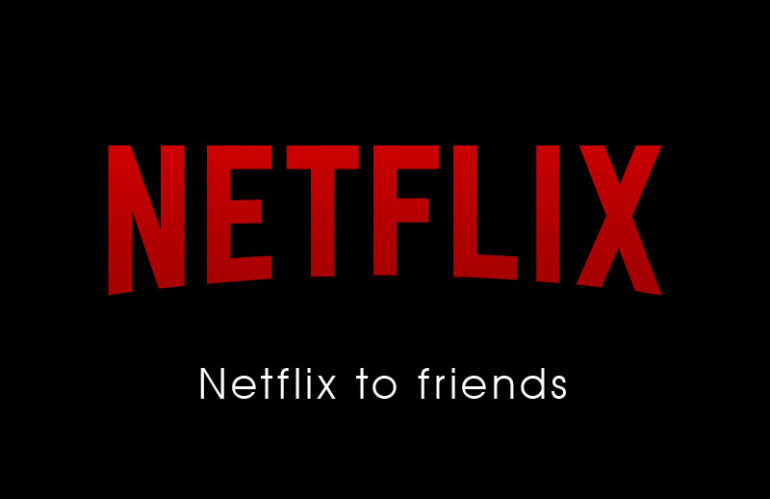 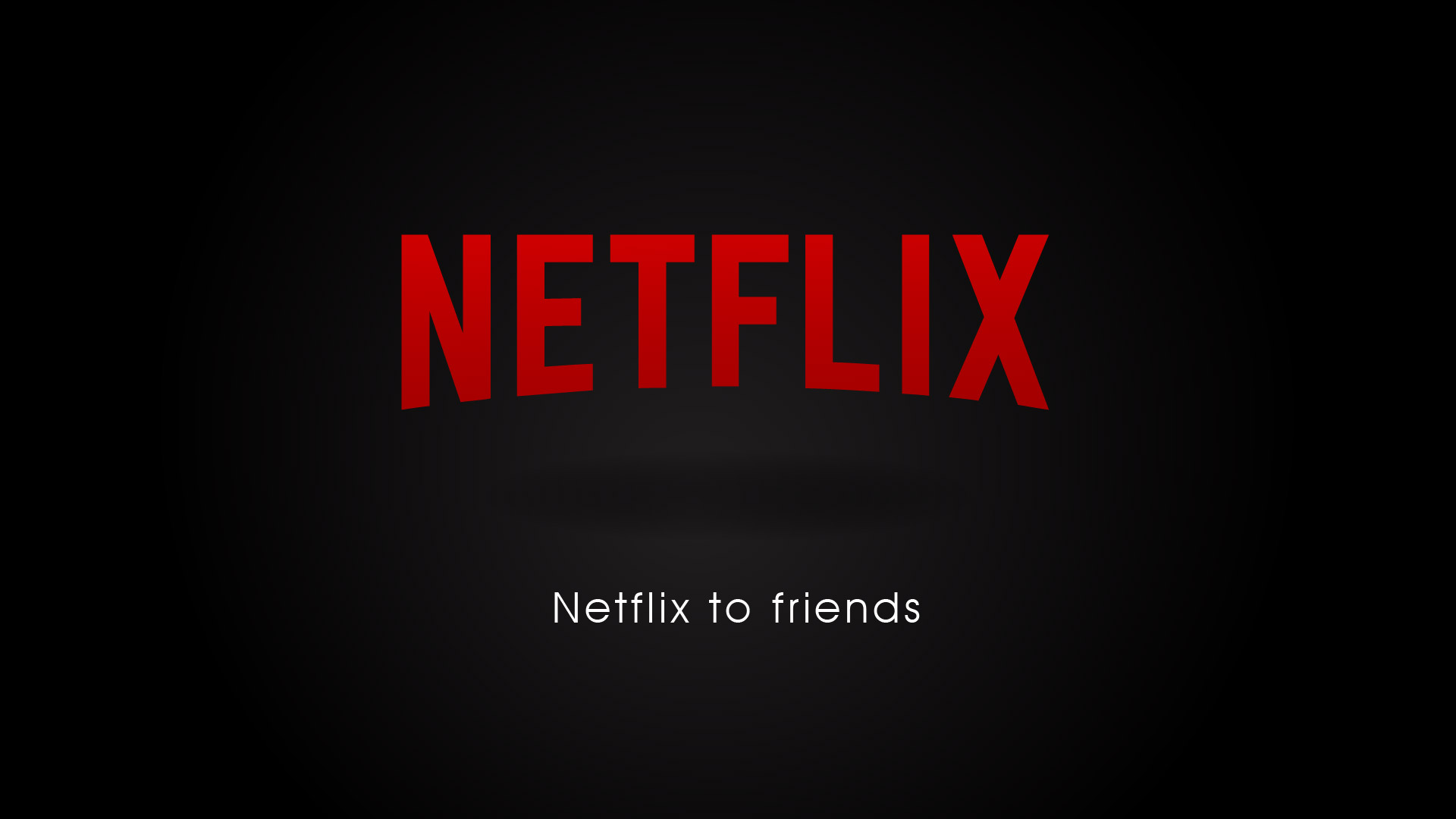 How long does it take to
choose a movie to watch?

Turns out it’s not that easy when you have plenty of movies on your Netflix home screen.

Despite all the smart algorithms that Netflix uses to suggest you most relevant movies, still,
according to the studies, 75% of the users are struggling with the choosing process.
More precisely, according to The Wrap, Netflix users spend on average 18 minutes on a given day
deciding what to watch, or twice as much as cable television viewers.

The scope of this project is to investigate Netflix users’ interaction
with the website and suggest possible UX improvements.

Busy people of age 25-45 need a way to quickly find a TV Show/Movie to watch on Netflix,
because they have limited time on media entertainment, which is an important part of people’s
relaxation and stress release procedure at the end of the busy day.

In any kind of decision-making process, people do value their friends and colleague’s opinion.

They discuss the movies in the workplace or on the hangouts, they suggest each other good movies, knowing that the person will like it, based on their personal awareness of the friend’s mood and preferences.

We believe that the functionality to get and give suggestions to friends about the movie directly from Netflix will narrow down the choices for the user and will make those more relevant and personalized.
The KPI (Key Performance Indicator) will be the time that users spend on searching, we want the users to spend less than 7 minutes on the searching process.

The method of in-person interviews was used for this research.

“Watching Netflix before bed is like my sleeping pill. I need it.”
– Diana T.

“Sometimes I search on Netflix, then I try google, and if I don’t find something really worthy, I just turn off the TV.
– Shana M.

“I have to check the real people’s reviews on a certain movie, to make sure it’s really a good one.
– Harry J.

So the user research showed that there is an issue with spending too much time on searching for a movie and making a decision on what to watch.

In reality, people do use their friends’ suggestions, so the idea of
projecting it from the face to face discussions into an in-app functionality could be a good solution. 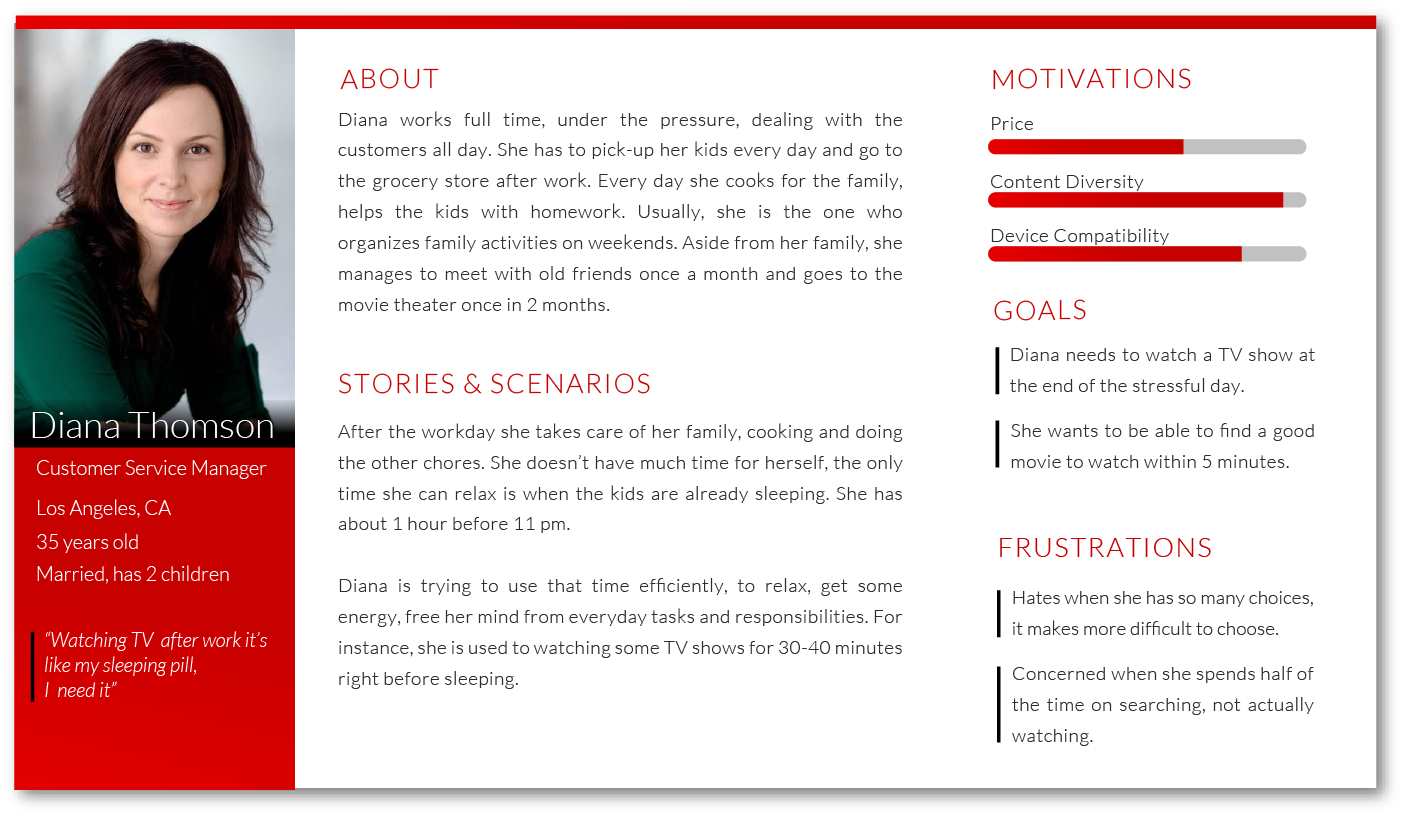 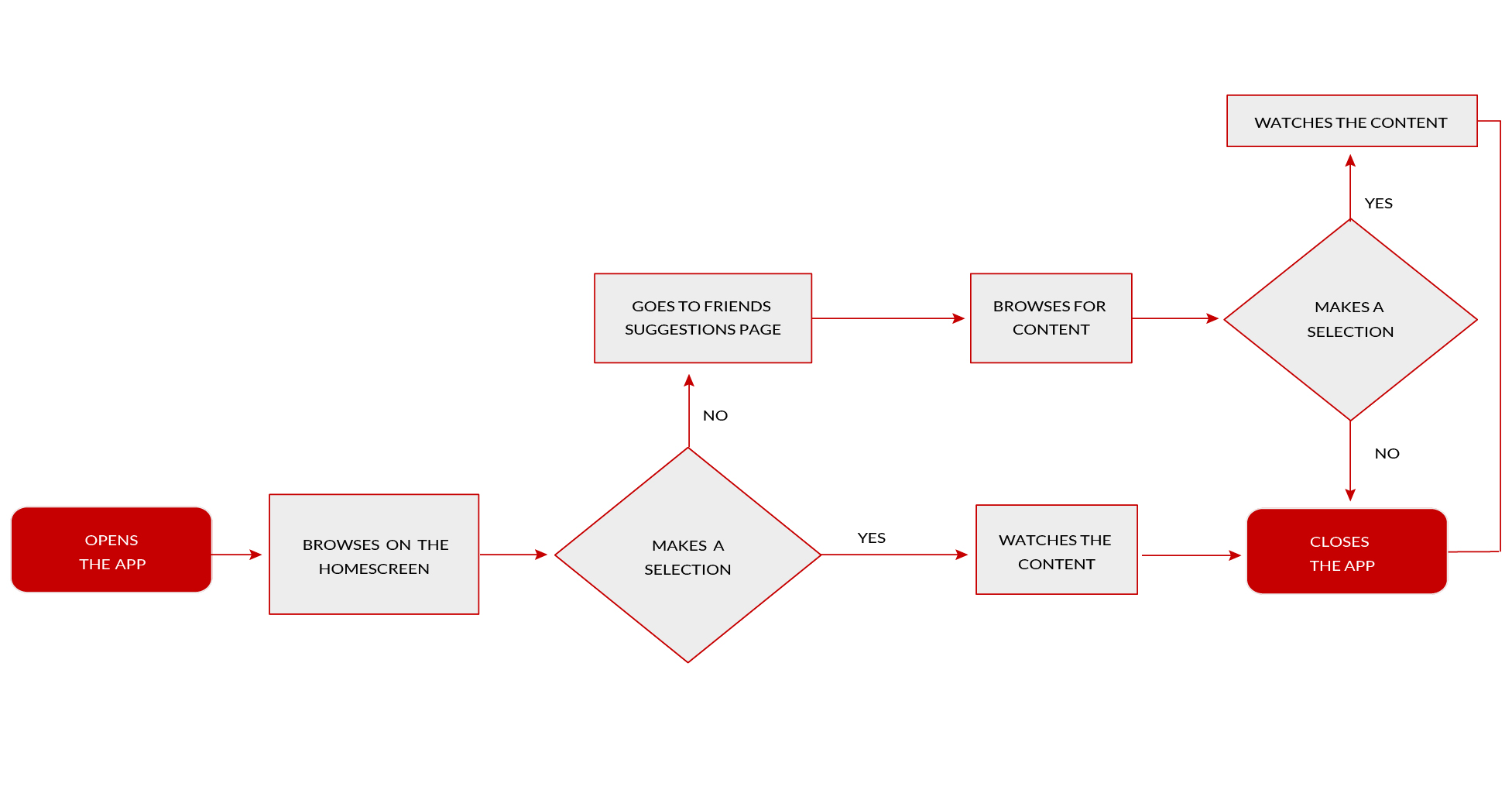 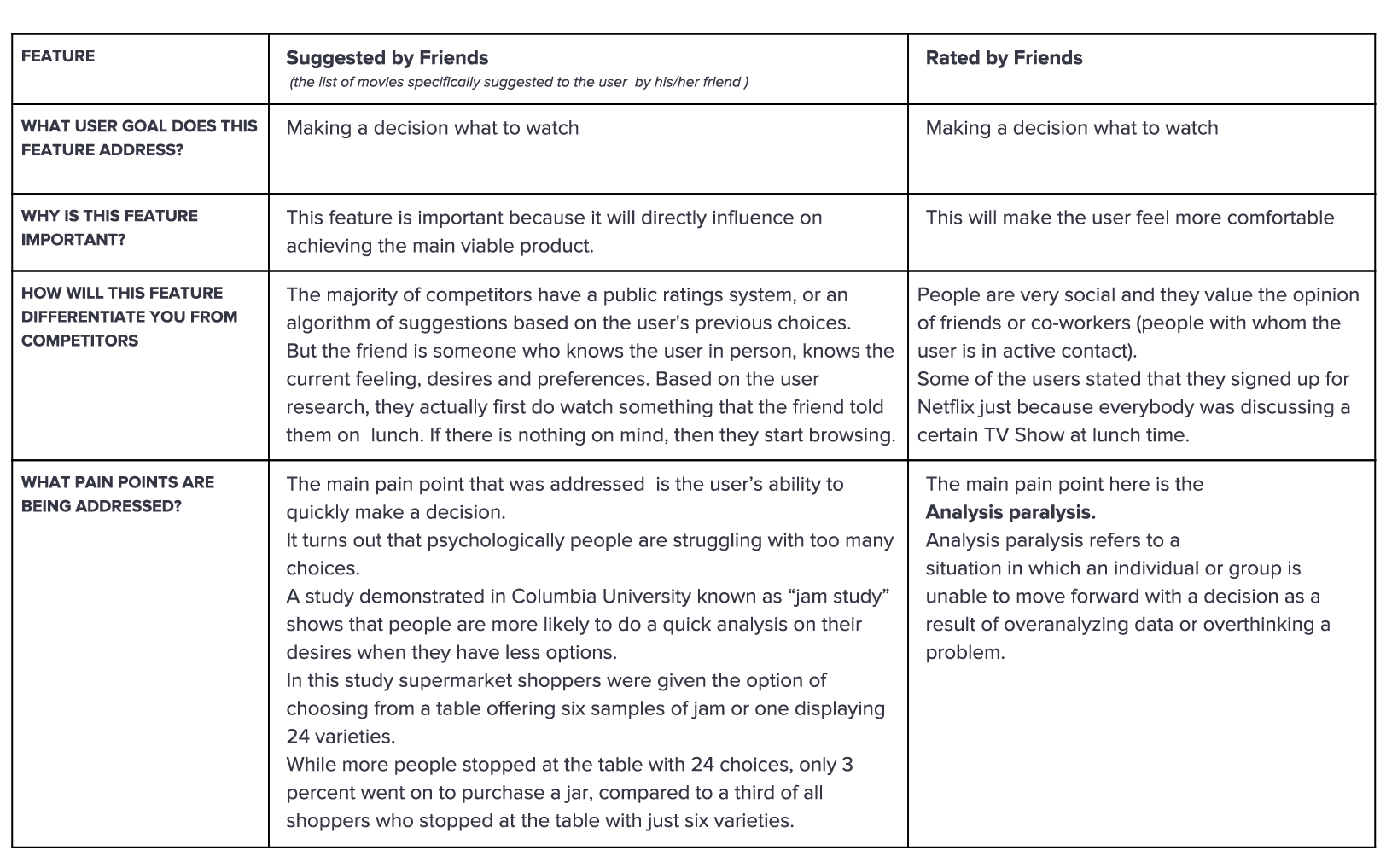 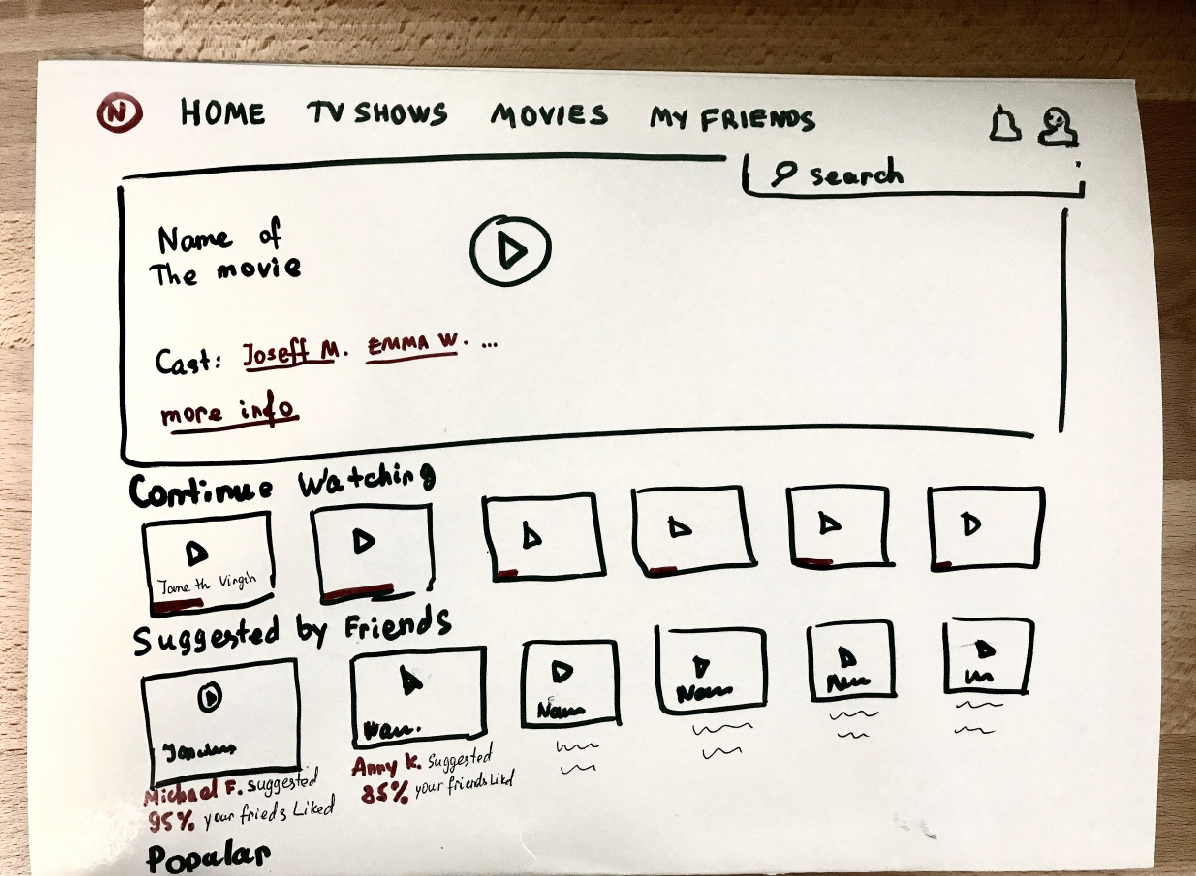 During the brainstorming and design studio sessions was proposed to have the “Continue watching” section in a more prominent position- right section.

After the first iteration (sketching) several improvements were implemented on the wireframed prototype:

Further, there were 2 hypotheses regarding the location of the “Suggest to friend” button. 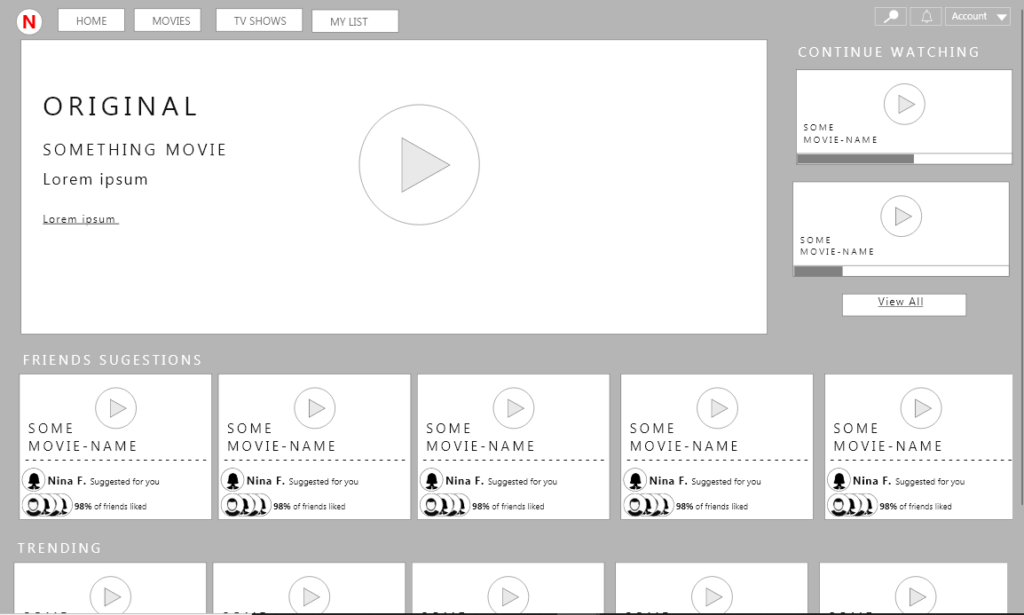 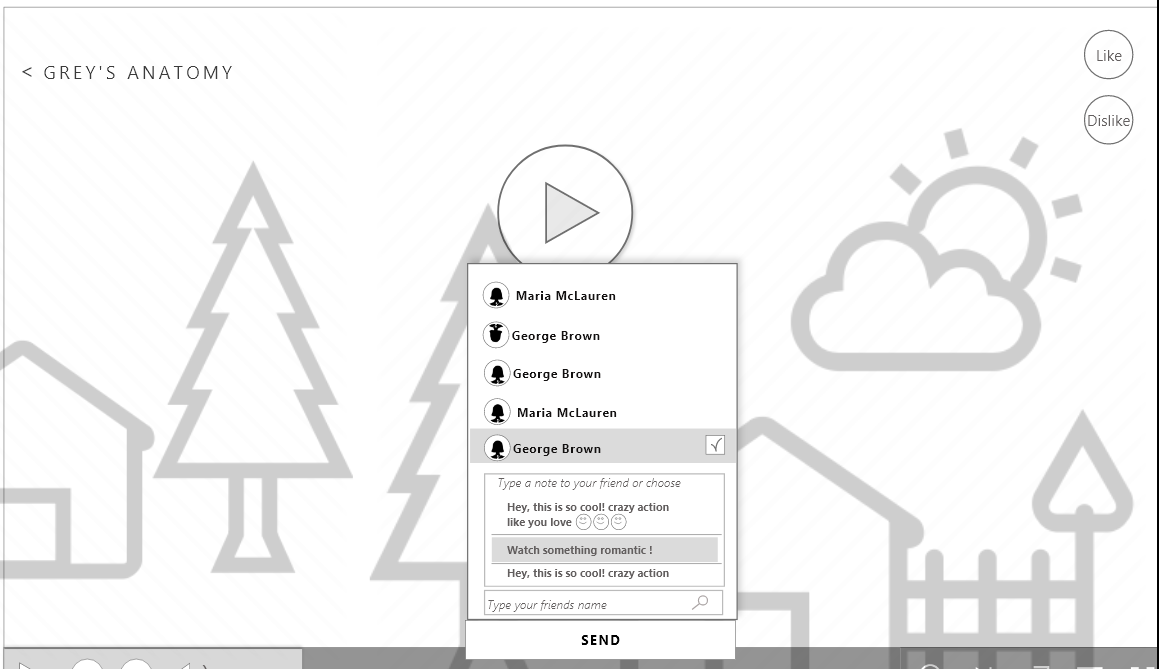 As mentioned above, based on the usability tests of 2 hypothetical prototypes the findings were as follows:

Link to the Final Hi-Fi Prototype 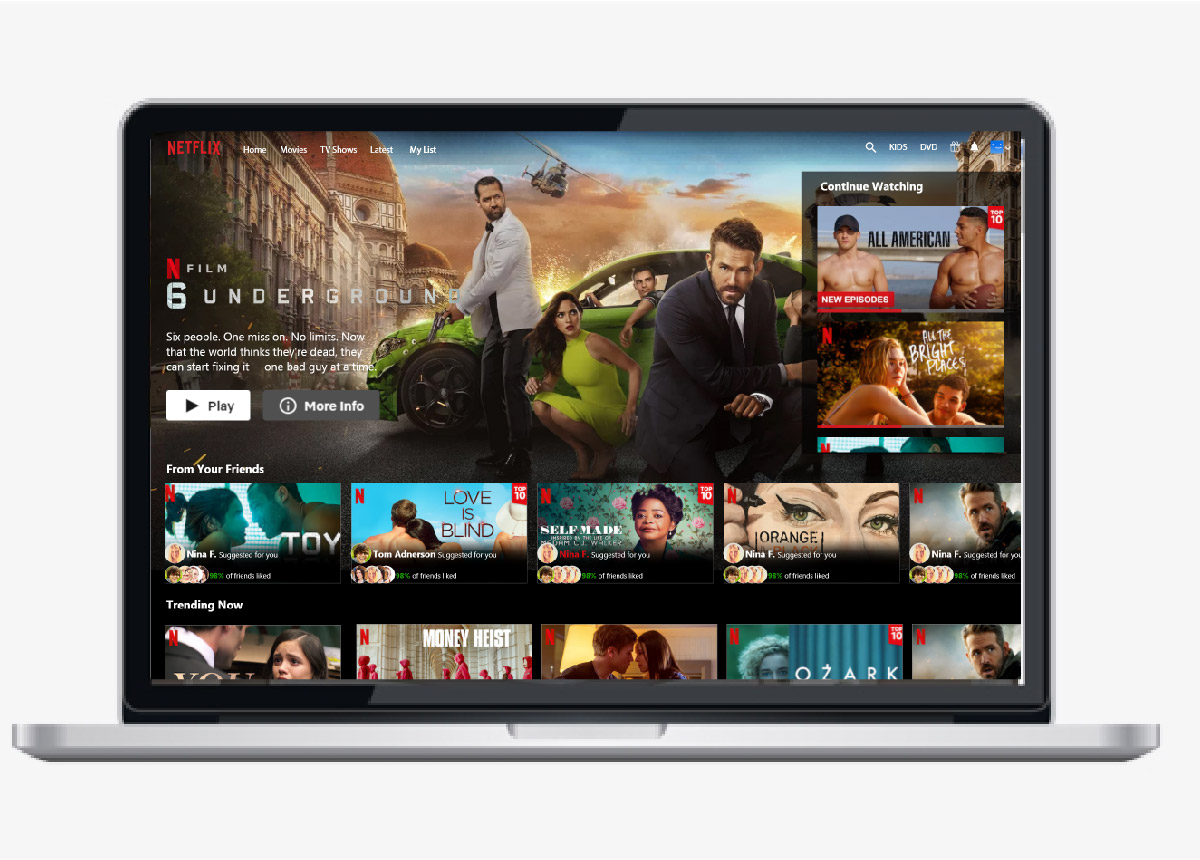 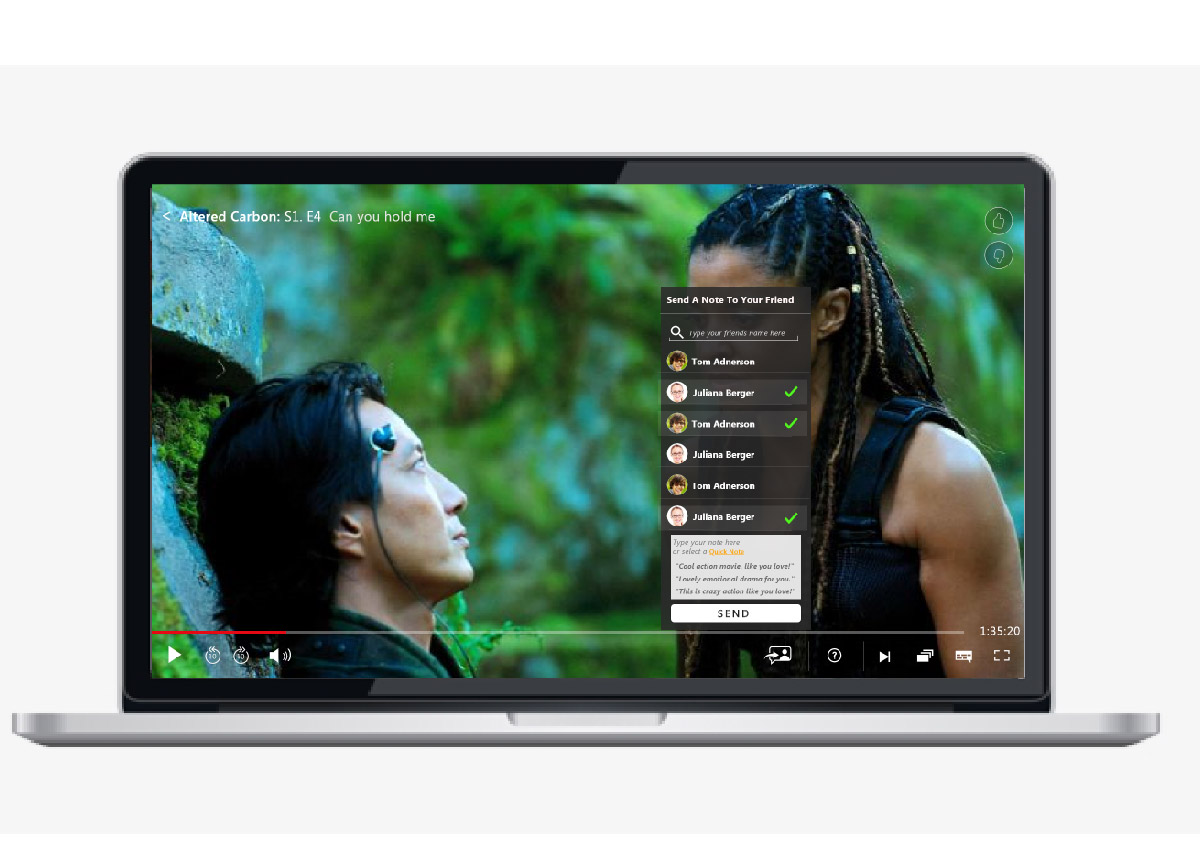 The concept also includes the user flow process of how the user links his friend list from different social media platforms (Facebook, Twitter). The detailed implementation of this user flow is in progress and I will add it to the project details in the future.

Being a huge fan of Netflix, I enjoyed working on this concept project.

One of the most challenging aspects of the process was conducting and analyzing the research and figuring out how to best implement the ideas.